Sky Princess Returns To Southampton in 2023

Fantastic news that Sky Princess will return to homeport from Southampton in 2023.

With 16 roundtrip sailings available, departing between April and October 2023, there’ll be plenty of choice:

Fares start from £699pp or all-inclusive from £909pp for a seven-night Spain and France cruise on Sky Princess, departing May 13, 2023.

As one of the newest ships to join our fleet, having Sky Princess as our homeport ship again in 2023 is testament to Princess Cruises’ devotion to the UK and Irish market. We are delighted that this magnificent MedallionClass ship will be based in Southampton for three years running.

Furthermore, we are thrilled to be launching the 2023 UK and Europe programme two months earlier than we have before, following such high demand for our 2022 departures.

Pre-register your interest today for these sailings, and we’ll be in touch with the relevant info as soon as we have, ready for on sale date – 16 July 2021!

The 2023 UK and Europe season runs from March to November. Other deployment highlights include:
·        Enchanted Princess sails her first Mediterranean season on a series of seven-night voyages departing from either Barcelona, Rome (Civitavecchia) or Athens (Piraeus), which can be combined for the ultimate 21-day exploration.
·        Regal Princess returns to the Baltic sailing 11-night Scandinavia & Russia cruises roundtrip from Copenhagen, featuring an overnight in St. Petersburg on every sailing.
·        Emerald Princess departs on 12-night British Isles sailings with options including Liverpool, Portland (for Stonehenge) and the Orkney Islands, all departing from Southampton. Guests also have the unique opportunity to experience the Edinburgh Military Tattoo from Greenock on the July 31 and August 12, 2023 departures.
·        Island Princess offers voyages throughout Europe, including above the Arctic Circle in search of the Northern Lights from Southampton, and to the Mediterranean and Israel on 14-night cruises sailing from Rome (Civitavecchia).
·        Sky Princess and Island Princess spend the Summer Solstice at the top of the world when the sun never sets on 14- or 16-night Land of the Midnight Sun & Summer Solstice voyages.
·        All five ships sail spring and autumn transatlantic voyages crossing between Ft. Lauderdale and Barcelona, Copenhagen, Southampton, New York or Rome (Civitavecchia).
·        A total of 53 UNESCO World Heritage Sites are included, such as the White City of Tel-Aviv from Ashdod in Israel; the Acropolis in Athens, Greece; and the Ancient City of Ephesus from Kusadasi, Turkey.
In addition, with 24 “More Ashore” late night and overnight calls in port, guests can make the most of their time exploring and experiencing the local sites and cultures. Princess is also offering five distinct cruisetours:
·        Sightsee in the cosmopolitan city of Madrid on a Spain cruisetour
·        Discover the birthplace of the Renaissance on a Classic Italy cruisetour
·        The Imperial Treasures cruisetour is available for those who want to take in the art and architecture of Prague, Vienna and Budapest
·        Marvel at the sweeping landscapes on the Ring of Kerry cruisetour
·        A new Best of Greece cruisetour that includes a visit to the UNESCO World Heritage Sites of Mycenae, Meteora and Delphi. 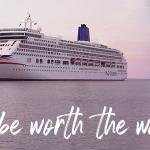