As Seen On Channel 5’s Cruising With Susan Calman

In 2020 Channel 5 announced “Cruising With…” would have a new presenter…
Scottish comedienne, Susan Calman takes the helm from Jane McDonald, and sets sail on new adventures aboard brilliant and beautiful cruise ships.
Want to know more about the offers available onboard the ships highlighted in the programme?
Check out our handy guide below to the offers for ships featured on Cruising With Susan Calman.

Join Susan as she cruises the Greek Isles aboard Marella Explorer on the Greek Mystique and Adriatic Affair itinerary… judging by this video it looks like she has an incredible time onboard, and even gets to chat with Captain Kostas! Susan sets sail from Dubrovnik and disembarks in Chania, Crete, where she takes a tour of the city’s old town and harbour before heading to the mountains. Susan also goes on an excursion to the Acropolis in Athens.

DECEMBER 2022: Susan’s back onboard with Princess Cruises, and this time she’s off to the stunning landscapes of Canada & New England, sailing from New York City, USA, to Québec, Canada. 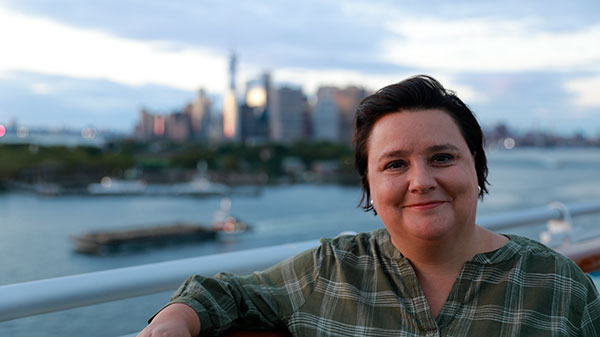 It’s another 2-part special (airing 30 December 2022 and 6 January 2023 at 8pm), and the programmes feature the sights and culture ashore, and the fabulous features of Caribbean Princess. More details here.

APRIL 2022: Cruising with Susan Calman is back with a two-part special, aboard Princess Cruises‘ gorgeous ship Regal Princess! 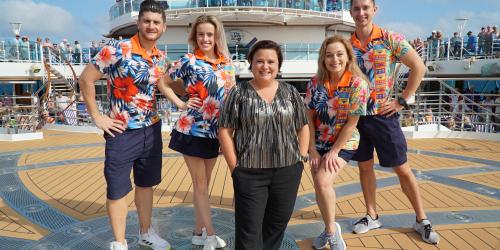 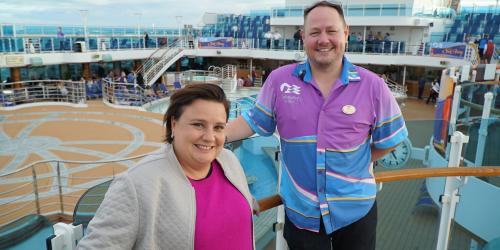 Follow Susan as she sails on a 12-night Canary Islands cruise aboard Regal Princess from Southampton to visit the islands of Gran Canaria, Tenerife and Lanzarote, before heading to Madeira and the Spanish port of Vigo.
Onboard the MedallionClass Regal Princess, Susan tries her hand at cocktail flaring, gets involved with flower arranging for a wedding at sea, enjoys a pampering session and serves afternoon tea in The Sanctuary. Susan also uses the cruise line’s Medallion, a ten pence-sized wearable device that enables features such as expedited contactless boarding and locating friends and family anywhere on the ship, as well as enhanced services such as having food, drinks and retail items delivered to wherever guests are onboard.
See the latest offers for Regal Princess ►

AmaWaterways, unique double-width ship, AmaMagna is the next ship, and first river cruise to receive the Cruising with Susan Calman treatment! With two-one-hour specials airing in the week commencing 19 December 2022 on Channel 5, the festive Christmas Markets of the Danube will be showcased. Travel with Susan from Vilshofen in Germany to Hungary’s capital Budapest. For more information on cruising on the Danube on AmaMagna, please visit our luxury sister brand website, the Cruise Village.

Susan Calman will be seen boarding Holland America‘s Signature-class Eurodam in Fort Lauderdale for a spectacular 10-night Panama Canal Sunfarer voyage. Join Susan as she enjoys the five-star amenities of Eurodam, chats with guests – and experiences some thrilling adventures ashore.

During the first of two episodes. Susan will visit Holland America Line’s stunning private island of Half Moon Cay, then call into the gorgeous Dutch Caribbean islands of Aruba and Curacao. Episode 2, will feature the modern world wonder that is the Panama Canal plus the incredible rainforest scenery of Costa Rica.

Holland America Line will operate a series of similar 10 and 11-night Panama Canal Sunfarer voyages during winter 2022/3, also onboard Eurodam, as well as a programme of full Panama Canal transits and leisurely cruises which feature some of the Caribbean’s most beautiful islands, including calls into Half Moon Cay – which celebrates 25 years on 12th December 2022!

Susan sets sail on 2016’s biggest ship in the world, Harmony of the Seas, on a fabulous Mediterranean itinerary. Expect her to be surfing and sliding her way from Spain and France to Italy! She’ll be discovering all of the ship’s first-at-sea feats, in addition to the favourites that you know and love from Royal Caribbean! 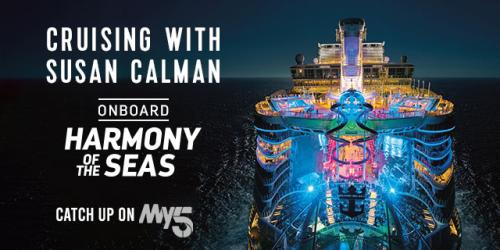 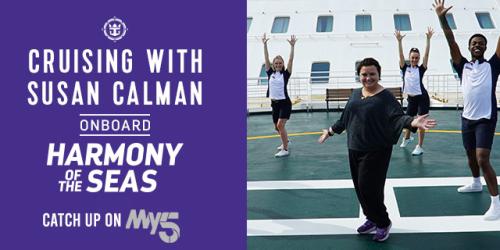 Prepare to be wowed by the tallest slide at sea, Ultimate Abyss℠, deck-defying stunts at the AquaTheater and the robot-helmed Bionic Bar. Not to mention dazzling Broadway performances and globe-trotting gastronomic experiences that go from Asia to the Mediterranean, and beyond.
This sailing is actually available aboard the newest biggest ship in the world, Wonder of the Seas!

Christmas Cruising with Susan Calman was a two-part special, that saw Susan joining Hurtigruten‘s MS Maud for a Northern Lights Expedition from Dover. Visiting winter wonderlands that have inspired Christmas tales for years, meeting Vikings & reindeer, husky sledding and beer-tasting are just a few of the highlights that accompanied the incredible experience of seeing the glorious Aurora Borealis.
Fancy an expedition adventure for yourself? Check out the offers on our sister brand website, the Cruise Village ►