The World Voyage on Queen Mary 2

Cunard are pleased to announce that Queen Mary 2‘s iconic voyage returns for 2022.

Let Queen Mary 2 capture your imagination with the imminent launch of her new 2022 World Voyage itinerary. Sailing on a course through the Suez Canal and back, she will journey across the Mediterranean Sea to Greece, Dubai, Hong Kong and Singapore before reaching southeast Australia.

Our guests have told us that they want memorable destinations which combine intrinsic culture with glamour and heritage. We believe our 104 night classic adventure will deliver just that, with a wealth of fascinating shores awaiting your arrival. With 27 ports of call in 16 countries, and featuring overnight stays in Haifa, Dubai, Hong Kong and Sydney, plus a late night departure from Colombo, this World Voyage offers you an extraordinary journey.

The voyage will be split into six sectors, each of which is also available individually. Departing January 10th and returning April 24th 2022, Queen Mary 2’s new World Voyage will be available to book from 10am on 8th September 2020.

Cunard World Club members who book by 30 November 2020 will receive a 5% saving off the cruise-only Cunard Fare.

Southampton to Dubai – 22 Nights
After departing Southampton, your first stop is the Spanish port of Cadiz – gateway to historic Seville, the birthplace of Flamenco. Athens, from Piraeus, will whisk you back to ancient antiquity on the hallowed ground of the Acropolis while in Israel, beautiful Haifa is yours to explore over two days. Next, you’ll transit Egypt’s Suez Canal, discovering the Red Sea coast, before Oman’s verdant mountains and banana plantations beckon. In Dubai, prepare to be met with a world of extravagance, from towering architecture to powder-soft beaches as white as snow. As with Haifa, a full day and night here offers a chance to experience the city as it springs to life after dark.

Dubai to Hong Kong – 17 Nights
As you leave the Persian Gulf coast, you’ll sail the Arabian Sea to tropical Colombo in Sri Lanka’s Western Province, benefiting from a late evening departure. From Port Kelang, venture to Kuala Lumpur or the Hindu shrines of the Batu Caves, before discovering the luscious Garden City of Singapore. In southern Vietnam, Phu My is your gateway to Ho Chi Minh City while further north, Chan May opens up the white sands of Lang Co Beach and the historic former capital, Hue. Your voyage culminates with an overnight stay in Hong Kong, a highlight city fusing dazzling skyscrapers with ancient shrines.

Hong Kong to Sydney – 16 Nights
Embark Queen Mary 2 in Hong Kong to travel southeast to Australia. Your first port of call will be Bitung in Indonesia, situated on Sulawesi; an island known for its vibrant fauna that flourishes both above and below the water. Your Australia exploration begins on the northern shores of Darwin before progressing to Cairns, where you’ll dock at Yorkeys Knob. Next come the majestic white sands of Airlie Beach, your gateway to the Whitsunday Islands and the Great Barrier Reef. Last but not least, sailing into Sydney’s world-famous harbour guarantees a memorable finale to this incredible antipodean journey.

Sydney to Singapore – 16 Nights
An overnight stay in Sydney gives you time to immerse in this dynamic city, before Australia’s wider coast and the continent of Asia beckon. Encounter an abundance of style in Melbourne and indulge at Adelaide’s scenic hillside wineries. A trip to Margaret River from Busselton offers a chance to unwind on long sandy beaches, while bustling Perth is easily reached from the notably more laidback Fremantle. Departing Australia, you’ll call at the island of Bali where emerald rice paddies, sacred temples and dream-like strolls on the beach are the norm, before arriving in sparkling Singapore; a fascinating and futuristic city.

Singapore to Dubai – 13 Nights
From Singapore, sail the Malacca Strait to the northwest of Malaysia and the port of Penang; the country’s food capital where the beaches are nothing short of otherworldly. Sri Lanka’s vibrant coastal capital Colombo is full of intrigue, not least the colourful and bustling Pettah Market. Three leisurely sea days in the Arabian Gulf provide ample time to recharge ahead of arriving in Qatar’s cosmopolitan capital Doha. The compelling Abu Dhabi, with its mesmerising salt-white sand and glass skyscrapers welcomes you to the UAE, before ultramodern Dubai dazzles with its luxury shopping, colourful fountain and ambient nightlife.

Dubai to Southampton – 20 Nights
Queen Mary 2’s return to Southampton from Dubai offers a captivating blend of ports and sea days. Muscat in Oman is your first call. Find yourself spellbound by souks piled high with frankincense and visit the striking Sultan’s Palace. From Aqaba, Jordan, head inland to the hidden city of Petra, looming like a sandstone mirage in the desert. A tranquil transit of the Suez Canal follows, leading to the Mediterranean. In Italy, Civitavecchia is the gateway to an adventurous day in Rome, where the Colosseum, Michelangelo’s Sistine Chapel, and the Trevi Fountain await discovery. A city awash with colour, sunshine-filled Lisbon then greets you before you sail home. 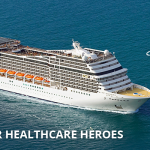 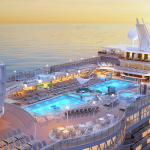